John is, among everyone you’ve met in your life, the closest approximation to the Platonic ideal of a good person. He is genuinely heartbroken at the sight of starving children, and donates half of his income to charities; he is the first to forgive anyone who wrongs him, going so far as to help them forgive themselves; he is the first to call you when you're going through a tough time, hoping that he can cheer you up or otherwise offer assistance.

There's just one problem, though: John is a murderer. Not an altruistic, ends-justify-the-means type murderer, not an accidental, unavoidable-freak-accident murderer — he strangled someone just because he wanted to know what it felt like. It was just one person, which is nothing compared to the thousands of lives he's helped save through his activism and direct action, but still — what?

Maybe his behavior was influenced by a brain tumor, as may have been the case with the university sniper Charles Whitman. Then again, maybe it wasn’t. Even if this were the case, such a mechanistic explanation would not be a one-off anomaly but instead a factor in John's personality. He’s been an extraordinarily good person in every conceivable way both before and after his murder, so you can reassure yourself that the John you judge to be good is the very same John that strangled someone to death out of curiosity$^1$. By any utilitarian measure, John is a good person. But ever since you learned about his murder, you just can’t think of him as good! After all, he’s a murderer!

What’s going on here? From where does the tension that usually accompanies this sort of situation arise? How must we judge John? We’ll attempt to answer these questions by building a general theory of trait assessment. Unless specified otherwise, "trait" should be taken to mean aspects of the personality; we do not care about traits of groups, commodities, governments, etc.

When we make an assessment of the "goodness" of someone, it is generally in response to some observation that directly informs some traits we associate with goodness: kindness, empathy, prosocial behavior, and so on. Technically, all of these are logically independent — we can easily conceive of a kind and empathetic person who nevertheless exhibits antisocial behavior, a kind and prosocial person who has no empathy, and so on — in general, though, we expect someone who exhibits kindness and empathy to be prosocial as well; the idea is that these traits all correlate with one another, forming a cluster of related and correlated traits.

It is not unreasonable to assign to this cluster a single latent variable, and in fact this is computationally easier: instead of learning a bunch of different large values, we can learn small deviations from a single large value. Instead of judging someone to be extremely kind, somewhat empathetic, not very prosocial, we can instead judge them to be somewhat good, listing kindness and and antisociality as slight modifiers to this judgement. Because they’re only slight, we can ignore or simplify them in many cases; this change of basis of the personality space allows us to store personality information with much greater ease, and to perform analyses of personality much more rapidly.

This is, incidentally, the idea behind principal component analysis. I'm not claiming that the mind learns traits and actually performs something analogous to PCA to find general clusters of traits, merely that the traits we've evolved to perceive in other humans resemble principal components. The general intuition behind this metaphor is given by the image below: we take a complicated data set whose points vary widely across the $x$ and $y$ axis, and introduce a new line such that data points vary primarily in how far up this line they go, with some less relevant deviation to either side of the line. It is a method of reframing the data in the most parsimonious manner. 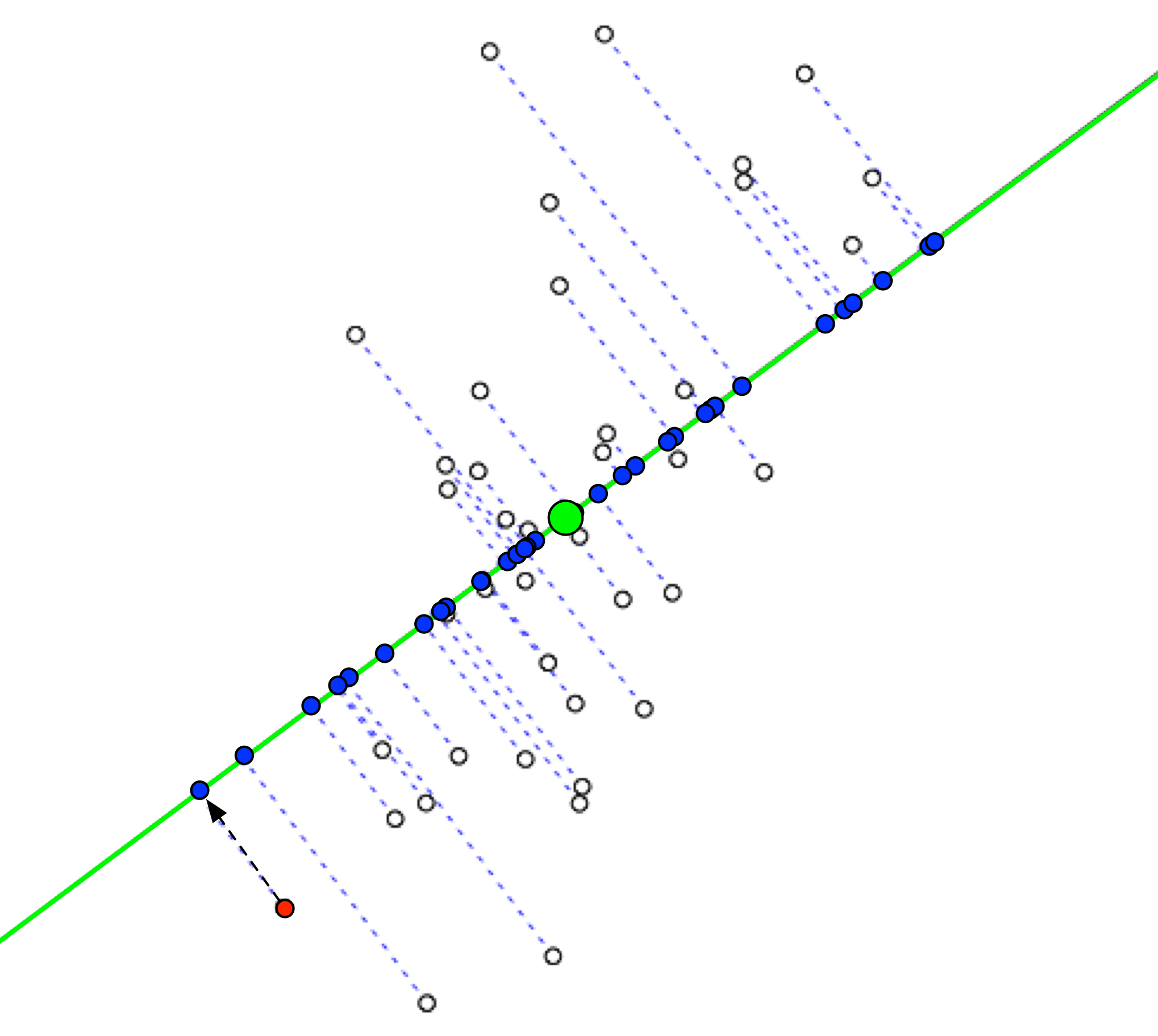 I claim that these are the mechanics behind the intuitive perception of goodness: that goodness is a latent variable designed to encapsulate information about a cluster of highly correlated properties that we find important, and that in the absence of information about specific properties in this cluster, we make judgements based on our understanding of this latent variable. For instance, if we learn that someone we've just met spends several hours a week volunteering at a homeless shelter — i.e., exhibits prosocial behavior — we increase our perception of their goodness, and expect that they are kind and empathetic as well, even though we can conceive of prosocial people who are miserable gits.

From this point of view, whereby our tendency to judge goodness is explained as a form of dimensionality reduction, strange phenomena like the halo effect have natural explanations. Namely, the halo effect would arise as the result of a general "quality" assessment we make of people: when someone is, say, especially attractive or humorous, we increase our perception of their quality, and expect them to display other traits associated with high-quality people, such as intelligence and goodness.

3. Bundlings are Hierarchical and Universal

Goodness is "broader" than any one of its factors, such as kindness, in a way that can be made relatively precise: suppose we present you a stranger, offer you an arbitrary fact about them that leads you to an initial assessment on their goodness, and then have you attempt to predict some other factor which is related to goodness. For instance, suppose we tell you that this stranger donates a significant portion of their income to a charity for homeless people, and then ask you to judge how likely they are to tend to an injured crow until it recovers, should they find one on their driveway tomorrow morning. These two traits fall under the ambit of goodness, but they're very distinct from one another, and your predictions regarding their kindness towards animals will not be very accurate (indeed, you may overshoot!).

If the single fact we offer you is, however, that this stranger routinely helps old ladies cross the road, attending to them with great kindness, it suddenly seems much more likely that they will tend to the injured crow, as this fact directly tells us about the stranger's kindness; your prediction would likely be more accurate. If the fact happens to be that the stranger is a passionate vegan for ethical reasons, your prediction would be even more accurate, as this directly tells us about the stranger's kindness towards animals in particular. So we can infer that kindness towards animals is a specific kind of kindness, which is in turn a specific kind of goodness.